The 7 Essential Steps of the Cybersecurity Kill-Chain Process

Solution: Implementing the 7 Essential Steps of the Cybersecurity Kill-Chain Process

“Implementing this Kill-Chain Will Stop Your Enemy Cold” says Goetsch, CEO of US ProTech, a Cybersecurity expert since 1999.  But he adds “Do Not Kill Them before Gathering the Highly Prized Intelligence you want.”

US ProTech has Mastered the Cybersecurity Kill Chain framework 1st developed with the DOD. It’s part of a process we like to call the Intelligence Driven Defense model for the identification and prevention of cybersecurity intrusion activity. The model identifies what 7-steps the adversaries must complete in order to achieve their objective and more importantly how and when to kill their presence.

In this series of 4 emails, you will gain the critical info needed to take action against the greatest threat of our time – Hackers using APT’s to devastate governments and businesses with ZDE’s.

The 7 Essential Steps of the Cybersecurity Kill-Chain Process

On July 16, 2015, the Palo Alto Networks Unit 42 threat intelligence team discovered a watering hole attack on the website of a well-known aerospace firm. The website was compromised to launch an apparent watering-hole attack against the company’s customers. It was hosting an Adobe Flash exploit targeting one of the newly disclosed vulnerabilities from the Hacking Team data breach, CVE-2015-5122. This attack yet again showcases the opportunistic tendencies of adversary groups and bad actors. The malware deployed by this exploit has been seen in a number of targeted attacks and provides attackers with a foothold on the victim’s machine and/or network. The exploit file, movie.swf, was ZWS compressed, a tactic that has been observed to evade anti-virus programs. Once uncompressed, a binary was found to be embedded in the Flash file. Upon further analysis, this file was found to contain behavior consistent with a Trojan commonly called IsSpace. Based on its codebase and behavioral patterns, it appears that IsSpace could possibly be an evolution of the NFlog backdoor, which has previously been attributed to the adversary groups DragonOK and Moafee. Both groups are thought to be operating out of Southeast Asia, and Moafee in particular has been associated with attacks on the US defense industrial base. 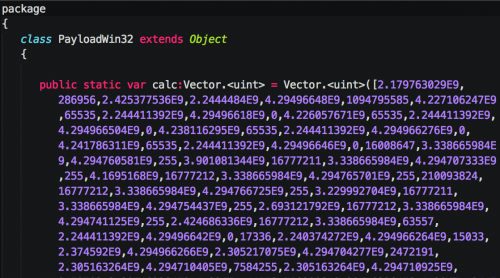 Exploit Details: The CVE-2015-5122 exploit found within the Flash file is nearly identical to the original proof of concept (POC) disclosed publicly from the Hacking Team data breach. An analysis by Trend Micro covers the POC in detail. Unlike the POC mentioned in the Trend Micro report, this particular exploit file was weaponized, and, instead of loading calc.exe, a much more malicious file was loaded. As seen in Figure 1, the embedded shellcode is obfuscated using the same technique of representing bytes as integers and exponential numbers. However, it appears that the adversary did not modify the POC much, as the variable name ‘calc’ remains unchanged.

How Vulnerability Assessment tools are different and what are good markers for Quality vs. Quantity

Contact US ProTech to receive a complimentary External Network Vulnerability Assessment which is Approved by the U.S. Government and Validated by the U.S. Department of Commerce to exceed U.S. Military Grade High-Impact Baseline Standards under N.I.S.T. 800-53 R4.